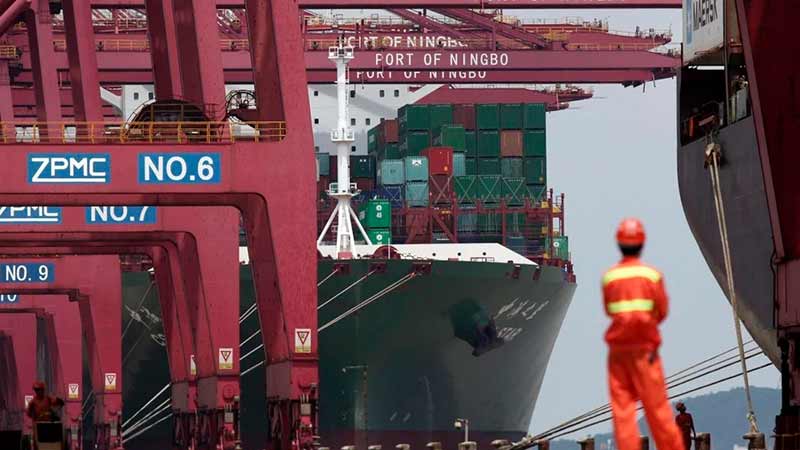 The world’s largest shipping port by cargo tonnage has shut down one of its key terminals following a confirmed case of Covid-19, putting further strain on the global shipping industry and disrupting supply chains.

The news came as container shipping rates from China and Southeast Asia to the east coast of the United States hit a record high of more than US$20,600 per 20-foot equivalent unit (TEU) – the standard measure for freight container volume – according to the Freightos Baltic global container freight index.

On Wednesday, a 34-year-old employee at the Meishan Terminal of China’s Ningbo-Zhoushan Port tested positive for the coronavirus despite being fully inoculated with two doses of the Sinovac vaccine. It was an asymptomatic infection.

Port authorities quickly locked down the Meishan area – including the terminal and bonded warehouse – and suspended its operations indefinitely, according to a statement released by the local government in Ningbo, Zhejiang province.

However, the Ningbo-Zhoushan Port, which is also the world’s third-busiest port in terms of container traffic, remains open, and Meishan’s shipments can be redirected to other terminals, according to industry insiders.

The average wait time for ships at the Ningbo port was around one to three days, as of Thursday, according to Akhil Nair, vice-president of global carrier management and ocean strategy at Seko Logistics.

“They will divert as many services as possible to other Ningbo terminals, but there is still the expectation that congestion will start to form,” Nair said. “The average wait time is expected to increase back to what we saw in Yantian, which was seven to nine days.”

Nair was referring to massive delays at Shenzhen’s Yantian port  in May and June. Weeks of containment efforts following outbreaks of Covid-19 among dockworkers in China’s Pearl River Delta caused global shipping delays, supply-chain disruptions and surging freight costs. The problems have not been fully resolved.

Lars Jensen, CEO of liner consultancy Vespucci Maritime, also said the Meishan terminal closure could have a similar impact on the Ningbo-Zhoushan Port that Yantian experienced when it was closed for more than three weeks.

“Significant problems, both for export cargo as well as for the movement of empty containers into the region, would then ensue,” he wrote in a LinkedIn post on Wednesday.

With its zero-tolerance approach to the coronavirus, China is currently carrying out mass testing to contain the spread of the highly infectious Delta variant, which Ningbo authorities said the Meishan worker tested positive for.

However, the deputy director of the Ningbo Centre for Disease Control and Prevention, Yi Bo, said the worker may have contracted the virus from his interactions with foreign crewmembers of cargo freighters that he had boarded at the port. Video surveillance showed he had close contact with crews.

In the first half of this year, the Ningbo-Zhoushan Port handled the most cargo throughput among Chinese ports, at 623 million tonnes, and overseas trade comprised 46 per cent of that total, according to the Ministry of Transport.

China’s supply chain and port operations have remained vulnerable since the onset of the pandemic in late 2019.

Even before the coronavirus case at the Meishan terminal, congestion had worsened considerably at the Ningbo-Zhoushan Port and Shanghai Port since July 21, according to the latest weekly report issued on Sunday by Sea-Intelligence, a container shipping industry data provider. The report attributed the backlog to more coronavirus-related restrictions in China.

Nair also pointed to the impact of Typhoon In-Fa  on the Yangtze River Delta last month, as well as global supply-chain disruptions on the whole.

The disruption in Ningbo could exacerbate existing delays in global shipping, as the impact on productivity at the port is likely to have a knock-on effect, Nair said.

“While the congestion is rampant around major global ports, currently all attention is on China,” he said, “because its ports are so large in scale, and exports starting from there would impact the overall global supply chain.”

Congestion in critical shipping routes involving Chinese ports has worried traders in recent months, with fears that goods will be delayed ahead of the busy year-end holiday period, including Christmas, according to shipping and logistics service platform Project44.

“The fact that ships remain delayed, and now Covid variant outbreaks in major Chinese manufacturing hubs are on the rise, indicates that there may be far-reaching downstream consequences going into Black Friday  and the holiday shopping seasons,” said Josh Brazil, vice-president of marketing at Project44, referring to the last Friday in November that is considered the official start to the US Christmas shopping season.

“We’re seeing a lot of variation in delay times between months, and routes such as US west coast versus east coast ports, making supply chains particularly challenging for shippers to manage,” he said.

As of June 2021, median ship delays in key Shanghai-Hamburg and Shenzhen-Hamburg routes reached 8.44 days and 7.86 days, respectively. And for ships travelling from Tianjin to Antwerp, Belgium, the median delay was 11.42 days in June.

Furthermore, many traders are passing on costs of delays to customers, potentially pushing up global inflation, Project44 added.

China, which had recovered well after the initial waves of Covid-19, became a main exporter of goods to other parts of the world still under lockdown, or which had not recommenced manufacturing.

But it is now battling its most serious outbreak since the virus was first brought under control in Wuhan, with more than 1,000 local cases confirmed since July 20.