A Canadian Pacific-Kansas City Southern combination without conditions 'would likely cause a significant loss of competition, especially for traffic moving via the Laredo Gateway,' Union Pacific (UP) told the Surface Transportation Board (STB) in comments filed Feb. 28. 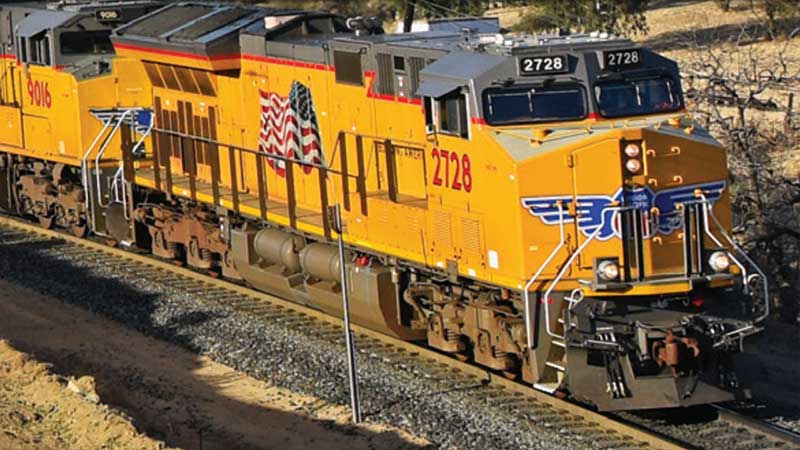 Canadian Pacific Kansas City (CPKS)—the U.S.-Mexico-Canada rail network formed by the proposed CP–KCS merger—would control Kansas City Southern de México (KCSM), “the only railroad serving the Mexican side of the critically important Laredo Gateway,” UP wrote in its 343-page filing to STB, which is reviewing the merger application. (Download UP’s filing below.) “The Board recognized long ago that rail competition via the Laredo Gateway must be protected because other gateways and other modes do not provide effective alternatives. KCS’s right to operate from Kansas City to Laredo exists only because the Board concluded in 1996 that the Laredo Gateway ‘occupied a position of separate and surpassing economic significance’ to U.S.-Mexico rail transportation.

“Since 1996 [following privatization of Mexico’s national railway], the Laredo Gateway has become even more important to cross-border trade. In 2019, the Port of Laredo was the leading U.S.-international freight gateway, moving $226.8 billion in cargo, which included 264,406 loaded rail containers crossing from Mexico to the United States, an increase of 282% from 69,204 loaded rail containers in 1996. The Board should prioritize protecting the Laredo Gateway in evaluating the proposed combination.”

Control of the Laredo Gateway, UP wrote, would give CPKC the “ability to increase the costs or reduce the quality of rail service in Mexico for railroads providing shippers competitive options to CPKC north of Laredo. CPKC would have a strong incentive to engage in this type of anticompetitive conduct: to meet Applicants’ aggressive promises to investors, CPKC must divert substantial volumes of business from shippers currently using UP or BNSF to provide service north of Laredo without sacrificing profits. The limited (if not illusory) efficiencies arising from the proposed transaction will not achieve those aggressive promises. UP’s comments propose narrowly tailored conditions the Board should impose to prevent the reduction of competitive options at gateways, particularly the Laredo Gateway.”

Railway Age provides highlights below of some conditions UP suggests if STB approves the CP-KCS merger:

• In their application, CP and KCS only “promise to provide shippers rates to gateways that are ‘commercially reasonable,’” UP wrote. Because of this, STB should require CP and KCS “to agree that when a customer asks CPKC to provide rates for (i) CPKC service for only former-CP, former-KCS, and/or former-KCSM portions of an origin-to-destination route, and (ii) CPKC single-line service on a competitive route, CPKC must provide the customer with a Rule 11 rate for the former-CP, former-KCS, or former-KCSM portions that reflects a mileage-based prorate of the CPKC single-line rate.”

• STB should “require Applicants to abide by the commitments KCS made when it acquired Tex Mex* to protect operations involving the Laredo Gateway and Laredo Bridge.” Specifically:
— “CPKC will not change the basic structure and operations of KCSM except through negotiations. CPKC’s carriers (including KCSM) will continue to cooperate closely and fairly with UP, BNSF and other rail carriers on interline services such as pre-blocking rail cars, improving automated customs pre-clearance procedures, supplying cars for shipments, accommodating run-through train service, providing excellent service, and promptly quoting rates.
— “CPKC will honor the terms of all existing Tex Mex and KCSM agreements and will allow such agreements to continue to their full term and not seek to cancel them early, even if it has the legal right to do so.
— “CPKC will treat all carriers fairly at the Laredo Bridge. CPKC will abide by the existing dispatching and operating practices over the Bridge, will not make any unilateral changes in the way the Bridge is dispatched and operated, and KCS, Tex Mex, and KCSM will continue to be bound by the contracts and agreements that now govern operations over the Bridge.
— “CPKC will ensure safety remains a top priority with regard to CPKC operations at the Laredo Gateway.”

• STB should require Applicants “to provide UP access to any new bridge CPKC constructs at Laredo on the same terms as it provides UP access to the existing International Bridge.”

• Since the Applicants fail “to address the impact of their planned traffic growth on capacity needs of joint facilities,” UP wrote, STB “should impose conditions to ensure the [merger] transaction’s implementation is in the public interest, and that CPKC cannot inappropriately force UP and other railroads—and their customers—to subsidize the transaction.” The conditions are:
— “First, Applicants must work with owners and users of rail lines and other facilities that would be used jointly by CPKC to identify investments in new capacity necessary to accommodate CPKC’s planned traffic growth.
— “Second, Applicants must commit to fund necessary investments in new capacity, with other railroads paying their fair share to the extent they use the new capacity in the future.
— “Third, Applicants must commit not to increase CPKC operations on affected lines above pre-merger CP or KCS levels until the owners and users of the lines agree sufficient capacity has been added to accommodate the traffic growth. The Board would remain available to resolve disputes at any stage of the process.” 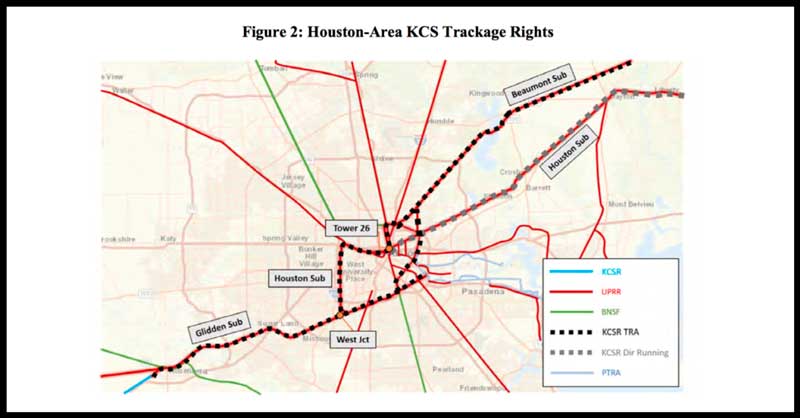 UP concluded by saying that its “proposed conditions would partially mitigate the harms that would result from approval of the [CP-KCS merger] transaction. If the Board does not impose UP’s proposed conditions, it should deny the [merger] Application.”