The failure of the shipping industry to inject urgency into the decarbonisation process at last week’s Marine Environmental Protection Committee (MEPC) of the International Maritime Organization (IMO) has come under scrutiny from US climate change pressure groups. 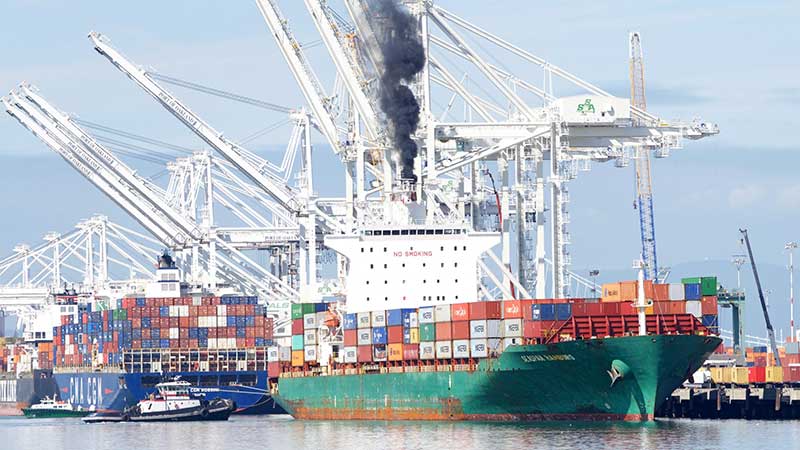 The largest retailers and their ocean carriers are playing an outsize role in emissions and must do more to reduce their carbon footprint, urges a report by two environmental interest groups.

The report, released today by Stand.earth and Pacific Environment, both members of the Ship It Zero coalition, puts the spotlight on the environmental impact of the ocean shipping strategies of Walmart, Target, Amazon and IKEA.

Between them, these four retailers accounted for an estimated 7% of US imports in 2020. Goods they brought in between 2018 and 2020 made up about 20m tonnes of carbon dioxide-equivalent emissions – as much as the annual emissions from five coal-fired power plants, the report claims.

And, according to the authors, the global shipping industry accounts for 3% of climate emissions, more than air travel.

“If shipping were a country, it would be the world’s sixth-largest climate polluter. But since maritime shipping negotiated itself out of the UN Paris Agreement, the effort to reduce emissions in the industry has been slower than in other sectors,” says the report.

The report homes in on transpacific routes from China to the US west coast, as they produced an estimated 21% of the four retail giants’ combined emissions in the 2018-2020 period. The problem has been aggravated for the west coast port communities because of the constant idling of ships waiting for berth space, it notes.

“Target and Amazon have played an outsized role in the current congestion and pollution crisis at the ports of Los Angeles and Long Beach. As Target faces a swell of demand in places like California and a doubling of its digital sales, and as Amazon increases its control over its own gas-guzzling shipment and parcel delivery, it is past time to hold these retailers accountable for their responsibilities at the ports,” said Dawny’all Heydari, Ship It Zero campaign lead at Pacific Environment.

The report highlights the long-standing commercial ties of the four large retailers with their ocean carrier partners, noting that carriers like CMA CGM are increasingly offering end-to-end logistics solutions. Walmart, which the authors identified as the US importer with the highest volumes traded and the most emissions, relies heavily on CMA CGM, say the authors.

The close relationships of the large retailers and their ocean carriers offers an opportunity for significant reduction in shipping emissions, the report argues.

“Major retail companies and cargo carriers are flush with cash from pandemic-driven record-breaking profits and are tightening their already close relationships. This is an unprecedented opportunity for retail brands and cargo carriers to work together to immediately reduce their maritime emissions from their existing container fleets and build zero-emissions shipping into their growth model,” said Kendra Ulrich, shipping campaigns director at Stand.earth.

It accuses carriers of dragging their feet because of the associated costs, an argument that it sees as invalidated by the record profits that container lines have piled up since the pandemic hit.

“Major cargo carriers are lagging in moving towards zero emissions, citing that costs have been prohibitive. Container industry profits are unprecedentedly strong, consumers support clean shipping, and the technology is available. There are no longer any excuses left to set goals to meet zero emissions for 2030. Retail companies looking to achieve climate goals must engage with cargo carriers that will give them zero-emission freight options to get their goods to market,” said Madeline Rose, climate campaign director at Pacific Environment.

The report notes that IKEA has made progress in reducing emissions by moving some traffic from Asia to the US on an alternative routing that combines rail to Europe with ocean shipping to ports at the US east and gulf coasts. The authors also mention that Amazon has committed to moving 10% of its freight on zero-emissions ships by 2030 and that both Amazon and IKEA  were among the founders of Cargo Owners for Zero Emission Vessels (coZEV), a retailer-led initiative launched in October that aims to move 100% of products off fossil-fuelled cargo ships by 2040.

“Reducing, and ultimately eliminating, maritime emissions will not happen without bold commitments and concrete actions from the companies paying for cargo carriers to transport their goods. The retail brands that fill our homes and lives with their products bear a direct responsibility for the pollution their supply chains create, and for taking the necessary actions to demand a transition to zero-emissions shipping this decade,” said Ms Ulrich.

The report calls on Walmart and Target to break their silence on the issue, to commit to zero-emission shipping and to transition to 100% zero-emissions shipping by 2030. It urges Amazon and IKEA to strengthen their commitments to zero emissions and take immediate steps in that direction. All four companies should also commit to public reporting and transparency on their maritime shipping.