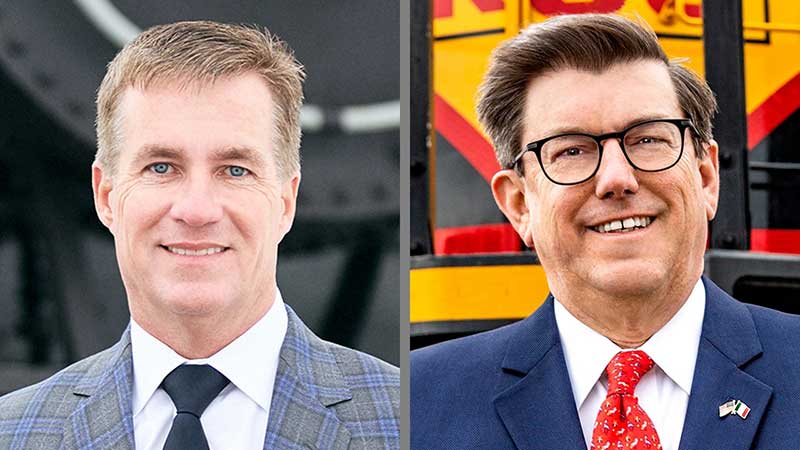 “Keith Creel and Pat Ottensmeyer will reconfigure the North American rail landscape by completing what would be the first Class I merger in more than 20 years and creating North America’s first transnational freight railroad, Canadian Pacific Kansas City, or CPKC,” Railway Age Editor-in-Chief William C. Vantuono said of the recipients of the 59th annual award. “This is a landmark combination that will enable seamless, single-line freight rail service linking Canada, the United States and Mexico, opening up new opportunities for rail market share growth and vastly improved customer service. Merging these two iconic railroads, each with a unique history and legacy, required strategic planning, cooperation, enthusiasm and execution.”

“I am honored to receive this recognition on behalf of the dedicated people who make this iconic company run safely and efficiently,” Mr. Creel said. “Tremendous work has been done by many to generate this once-in-a-lifetime partnership with Kansas City Southern. I am humbled to be recognized with this award for the second time and particularly pleased to share it with Pat Ottensmeyer.”

“I am pleased to accept this recognition on behalf of the nearly 7,000 KCS employees in the U.S. and Mexico,” said Mr. Ottensmeyer. “KCS has a rich legacy dating back to 1887 of forward-thinking, strategic connections and vision, and because of the dedication of our hard-working and talented employees, together with CP, we have a very bright future.”

Mr. Creel became President and CEO of Canadian Pacific on Jan. 31, 2017. He is the 17th person to lead the company since 1881. Creel was appointed President and Chief Operating Officer in February 2013 and joined the CP Board of Directors in May 2015. Prior to joining CP, he was Executive Vice President and Chief Operating Officer at CN. He held various positions at CN, including Executive Vice President Operations, Senior Vice President Eastern Region, Senior Vice President Western Region, and Vice President of the Prairie Division. Creel began his railroad career at Burlington Northern Railway in 1992 as an intermodal ramp manager in Birmingham, Alabama. He also spent part of his career at Grand Trunk Western Railroad as a superintendent and general manager, and at Illinois Central Railroad as a trainmaster and director of corridor operations, prior to its merger with CN in 1999. Creel holds a Bachelor of Science in Marketing from Jacksonville State University. He also completed the Advanced Management Program at the Harvard Business School. He has a military background as a commissioned officer in the U.S. Army, during which time he served in the Persian Gulf War in Saudi Arabia.

Mr. Ottensmeyer was elected as KCS President and CEO July 1, 2016. From April 2015 to June 2016, he served as President of KCS. From October 2008 through March 2015, he served as KCS Executive Vice President Sales and Marketing. He joined KCS in May 2006 as Executive Vice President and Chief Financial Officer and served in that role until October 2008. Ottensmeyer has a broad range of railroad experience from the various senior executive positions he has held at KCS over the past 13 years, and also with BNSF. During his time as Executive Vice President Sales and Marketing, he developed a deep understanding of KCS’s strategy as well as its customers and growth opportunities. He has an extensive understanding of financial matters, which helped him lead KCS’s Finance department during his time as CFO. He came to KCS with substantial experience in financial matters from serving in various executive roles, including treasurer and chief financial officer positions. Ottensmeyer holds a Bachelor of Science in Finance from Indiana University.